A NAVY COUNTERTERRORISM training document obtained exclusively by The Intercept appears to conflate socialists with terrorists and lists the left-wing ideology alongside “neo-nazis.”

The correct answer is “political terrorists,” a military source briefed on the training told me. The document, titled “Introduction to Terrorism/Terrorist Operations,” is part of a longer training manual recently disseminated by the Naval Education Training and Command’s Navy Tactical Training Center in conjunction with the Center for Security Forces. The training is designed for masters-at-arms, the Navy’s internal police, the military source said. 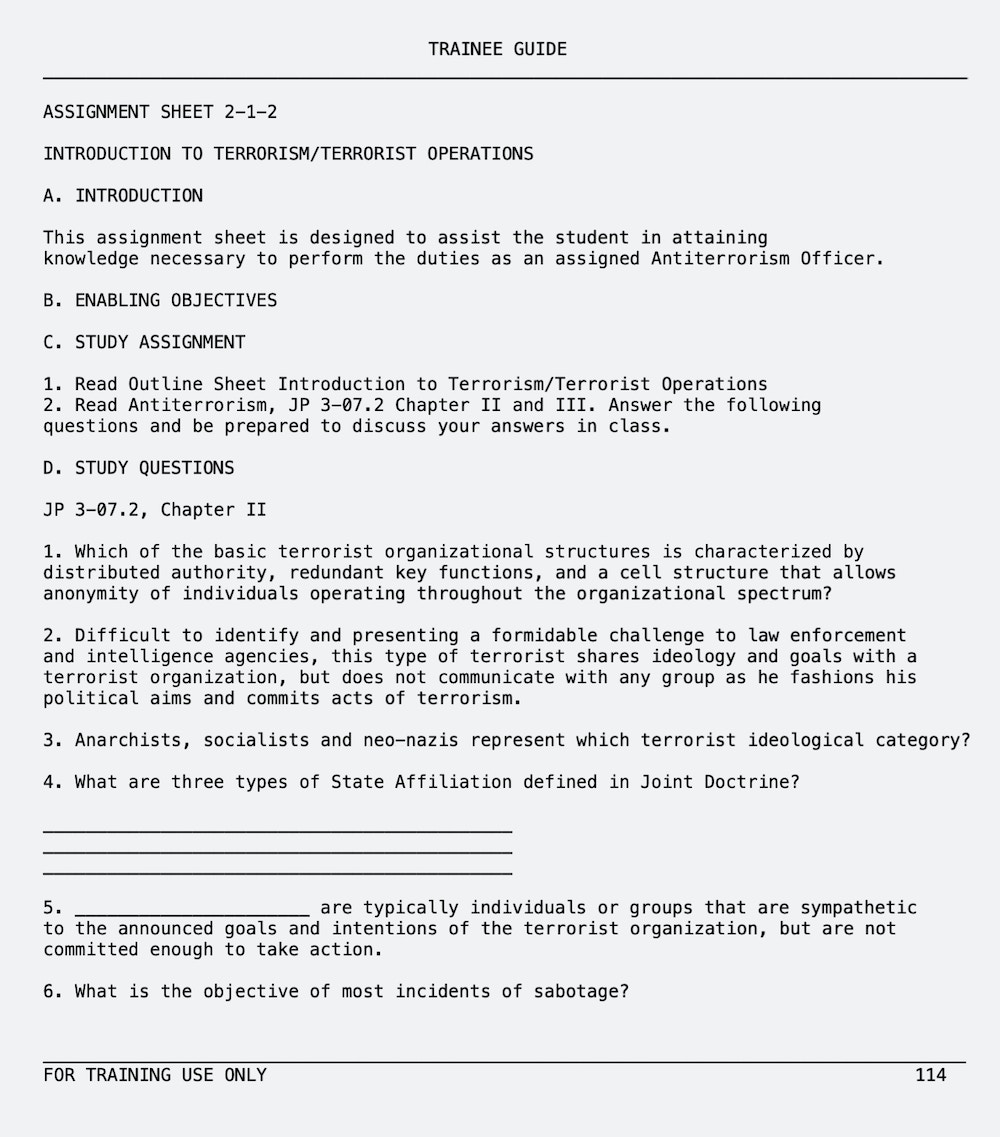 A reproduction of a Navy training document obtained by The Intercept.

“It’s just ineffective training because whoever is directing the Navy anti-terror curriculum would rather vilify the left than actually protect anything,” said the military official, who is not authorized to speak publicly. “Despite the fact that the most prominent threat is domestic, right-wing terror.”

Both the FBI and the Department of Homeland Security have identified white supremacists as the deadliest terror threat to the United States. In October 2020, the Department of Homeland Security issued its first annual “Homeland Threat Assessment” report, stating that white supremacists were “exceptionally lethal” and “will remain the most persistent and lethal threat in the homeland.” In September, FBI Director Christopher Wray, in testimony before the Senate Judiciary Committee, said that white supremacists “have been responsible for the most lethal attacks over the last decade” and that they comprise “the biggest chunk of our domestic terrorism portfolio.”

A spokesperson for the chief of naval personnel provided the following statement:

The “Training Guide / Assignment Sheet 2-1-2 / Introduction to Terrorism/Terrorist Operations” is a part of the approved curriculum for Anti-Terrorism Officer training courses.  These courses have been delivered in the current format since 2019 but have existed in other forms with minor modifications since 2002.  Each NETC course undergoes a formal course review every three years.  This training is not connected with recent DOD or Navy Anti-Extremism Training and the course material is not meant to promote any opinion or judgment, and represents no policy statement.

Asked about the debate over how to respond to the domestic terror threat, Kevin Kline, a former FBI assistant special agent-in-charge at the bureau’s New Haven field office, agreed that the white supremacist threat was serious but warned that any response must respect constitutionally protected activity like speech. “No matter what we do in responding to the domestic terrorism problem, the constitution cannot be a casualty,” Kline said.

While the right has been vocal with its concerns about being unfairly targeted for political opinions, media coverage of the Biden administration’s focus on domestic extremism has paid considerably less attention to what it might mean for movements on the left, including Black Lives Matter, antifa (short for anti-fascists), and the environmental movement. In fact, internal FBI documents I reported on in 2019 specifically list anarchists and environmental extremists among its counterterrorism priorities.

Wray testified last year to Congress that antifa is an ideology rather than an organized group — a widely reported rebuttal of claims by President Donald Trump that antifa was a terrorist organization. In the same testimony, Wray also stressed that the bureau was pursuing “any number of properly predicated investigations into what we would describe as violent anarchist extremists.” And while he rebutted baseless claims that antifa had instigated the January 6 assault on the Capitol, Wray also said, “That doesn’t mean we’re not looking and we’ll continue to look.”

As The Intercept reported in a recent series, the Justice Department’s handling of domestic extremism can often be arbitrary and disproportionate to any threat its targets may pose. One example of this is Black activist groups, which, as former FBI agent Mike German has pointed out, the FBI has been targeting for many years.

“The FBI judges BIE [Black Identity Extremist] perceptions of police brutality against African Americans have likely motivated acts of pre-meditated, retaliatory lethal violence against law enforcement,” the documents stated. “The FBI first observed this activity following the August 2014 shooting of Michael Brown in Ferguson, Missouri, and the subsequent acquittal of police officers involved in that incident.”

The document went on to describe a cryptic program code-named “Iron Fist,” in which the FBI would use undercover employees and recruit confidential informants among “Black Identity Extremist” groups. The documents even suggested that attempts to penetrate the groups had already been undertaken, describing the task as “challenging.” The FBI documents state: “It is challenging to get sources into BIE groups, due to security measures these groups employ. The vetting process and time investment to gain access to leadership in BIE groups is very lengthy. The use of undercover employees and online covert employees in BIE investigations would provide valuable intelligence to assist in mitigating the threat.”

The FBI’s Iron Fist program was concerning enough that then-Rep. Cedric Richmond, now a senior adviser to President Joe Biden, grilled the FBI director about it in 2019. It was far from the only time during the Trump administration that Democrats expressed concerns that the national security state was targeting groups on the political left. But those concerns have waned under the Biden administration, despite an intensified focus on domestic extremists that could include groups on the left, as the Navy document suggests.

According to the military source, the training materials also include a “black panthers fist symbol on a slide of terror orgs with al Qaeda.”

Echoing Kline’s concerns about constitutional rights, a senior Defense Department official familiar with the development of the military’s domestic extremism program said that defining “extremism” in a way that respects First Amendment rights was proving exceptionally difficult. An internal Pentagon draft document proposing language to define extremism, reviewed by The Intercept, is three pages long, the tortured language reflecting attempts not to violate First Amendment rights, according to the senior Defense Department official.

The Pentagon appears to be aware of the constitutional risks. A separate internal Pentagon document about the definition of extremism states: “As appealing as the concept of a one sentence definition may be, this would carry both practical and legal risks. A single sentence definition, crafted too narrowly, might fail to prohibit actions that threaten the Department’s ability to carry out its mission. A less specific definition, on the other hand, risks being so vague as to prohibit or chill Constitutionally protected conduct by servicemembers.”