With the introduction of ACLU Watch, more people can better understand that a robust police presence is not the true source of America’s crime problem, Robert Bridge writes.

Law enforcement officials have begun a watch beat of sorts against the American Civil Liberties Union, whose support of justice reform has translated into more criminals roaming the streets as police officers lose their jobs.

A number of liberal activists, armed with the most altruistic intentions, of course, are busy remaking America into a liberal bastion of utopian thinking, where the Cultural Marxists have put down the stakes on their zany new world, which promises to go international. But if surging gun sales in the Golden State are any indication, the progressives are off to a disastrous start.

“I’ve always been anti-gun,” Debbie Mizrahie of Beverly Hills said, as quoted by Michael Shellenberger in the New York Post. “But I am right now in the process of getting myself shooting lessons because I now understand that there may be a need for me to know how to defend myself and my family. We’re living in fear.”

And it’s not difficult to understand why. According to the FBI’s annual Uniform Crime Report released in September, the nation experienced a 30 percent increase in murder in 2020, the biggest annual jump since the bureau began tracking crime statistics 60 years ago. That record comes attached with a footnote that the mainstream media is at tremendous pains to ignore: this year, of the 12 major U.S. cities that broke annual homicide records, every one of them – from Rochester, New York to Baton Rouge, Louisiana – are run by Democrats. Or more specifically, by organizations that wield tremendous power and influence over the Democratic Party.

The one obvious name that always surfaces when speaking about the ‘criminal reform’ initiatives well underway in liberal-run cities is the billionaire philanthropist, George Soros. As the Democratic Party’s most prolific benefactor, Soros has filled the campaign coffers of various District Attorney races. For example, last year, amid the George Floyd Black Lives Matter protests, Soros donated $2 million to a PAC that backed Kim Foxx, who went on to become the State’s Attorney for Cook County, Chicago, where murder is now at its highest rate in almost 30 years. In keeping in line with woke ideology, which blames the ‘oppressive white system’ for the behavior of felons, Foxx immediately began to defer many prosecutions while reducing bail and sentencing guidelines for hardened criminals.

As it turns out, however, Soros is in good company, particularly with the ACLU, which is also working overtime defending the worst elements of society, while depriving victims of their rights. For a long time, this watchdog group was doing all the watching, imposing its warped worldview on communities around the nation. That looks set to change, however, after a coalition of seven police unions from three states put together a website to track exactly what the ACLU has been up to.

One of the ACLU’s pet projects involves bail payments, the site disclosed, which have been dramatically reduced in the name of ‘combatting racism and economic inequality.’ The initiative allows the convicted to put up just 10% of an already drastically reduced bond requirement, which has led to all of the predictably tragic consequences.

As just one example, James McClendon, 45, who police said had been in and out of jail dozens of times, was suspected in June of committing a double shooting that left a man dead and a woman injured in Atlanta. Yet the judge in his trial set bail at just $50,000, and McClendon was free to walk three weeks later.

“Most of the individuals were getting out within a couple of days and the bond was generally low,” Maj. William Ricker told The Atlanta Journal-Constitution. “On average, $28,000 was the general bond amount. Then, of course, you talk about being able to just pay 10%, that’s a significantly small amount for people to be back out on the streets.”

If bail reform doesn’t keep criminals on the street, then Proposition 47 certainly will, at least in California. Under the updated ruling, shoplifting charges on the theft of merchandise $950 or less was reduced from a felony to misdemeanor. Then-Lt. Gov. Gavin Newsom, together with the ACLU were supporters of the legislation.

“Prop. 47 reduces the barriers that many people with a low-level, non-violent felony conviction face to becoming stable and productive citizens, such as a lack of employment, housing and access to assistance programs and professional trades,” the ACLU wrote in support of the legislation back in 2014.

But it’s not just the thieves and murderers that the ACLU seems determined to defend, but kiddie flashers as well. Back in 2018, The Ohio House voted 80-0 for a bill that increases penalties for people who expose themselves to children. As Tier 1 sex offenders, such individuals are forbidden from living within 1,000 feet of a day care center or school. Such a rule seemed, somehow, incomprehensible to the New York-based watchdog.

“There is no evidence these policies and laws keep people safer or reduce recidivism,” said Gary Daniels of the ACLU of Ohio in written testimony. “Exiling sex offenders and making it more difficult to find housing and unemployment increase the chances they will commit another offense,” he said, as though employment has ever stopped perverts before.

Since the murder of George Floyd, these ‘crime reform’ endorsements by the ACLU, which negatively affects two groups of people – the victims of crime, and the police officers who were hired specifically to ‘preserve the peace’ – have been moving ahead full steam. Yet now, with the introduction of ACLU Watch, more people can better understand that a robust police presence is not the true source of America’s crime problem. By coddling criminals, the ACLU has helped to make U.S. neighborhoods infinitely more dangerous, something which more Americans need to understand.

Share
Previous The US Military Budget in the Form of a Mushroom Cloud
Next The U.S. Military Is a Machine of Impunity 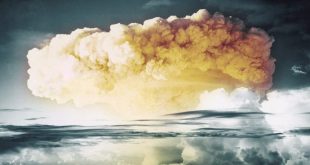 The US Military Budget in the Form of a Mushroom Cloud

Why it’s time to make deep cuts at the Pentagon. Where are you going to get …