‘Blood of Thousands on Their Hands’: 55 Senators Vote To Continue US-Backed Carnage in Yemen

“The U.S. must stop literally fueling the deliberate killing and starvation of countless civilians in Yemen, and support a peaceful solution to end this crisis.”

While 44 U.S. Senators on Tuesday were applauded by peace groups for voting in favor of a resolution that would have allowed Congress to begin reclaiming its war-making authority and ended the U.S. military’s backing of Saudi Arabia’s assault on Yemen, it was ultimately not enough to overcome entrenched opposition from the 45 Republicans and 10 Democrats who voted against it.

“55 senators will have the blood of thousands, who will die as a result of US support for the Saudi-led intervention in Yemen, on their hands.” —award-winning journalist Iona CraigIntroduced by Sens. Bernie Sanders (I-Vt.), Chris Murphy (D-Conn.), and Mike Lee (R-Utah), the resolution (SJ Res. 54) would have ended the tacit military support—including targeting assistance, refueling, and intelligence sharing—of the Saudi’s campaign to wage war on Yemen, a nation currently embroiled in a civil war and experiencing one of the worst humanitarian crises on the planet.

The final tally was 55-44 against the resolution, with only Sen. John McCain (R-Ariz.) not casting a vote. While five Republicans voted for the measure, the 10 Democrats senators who joined with the Republican majority to block it were: Coons (D-DE); Cortez Masto (D-NV); Donnelly (D-IN); Heitkamp (D-ND); Jones (D-AL); Manchin (D-WV); Menendez (D-NJ); Nelson (D-FL); Reed (D-RI); and Whitehouse (D-RI).

Iona Craig, the foreign correspondent who this year won a prestigious George Polk Award for her coverage in Yemen, said that those who voted against the effort will now have the “blood of thousands” of Yemenis on their hands as the war continues and the crises worsens. 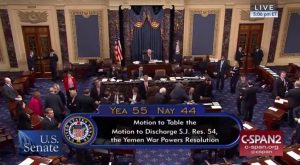 Anti-war groups, while disappointed with the outcome, celebrated the vote and heralded it as an important step in terms of getting congressional lawmakers to final assert themselves against an executive branch that has been allowed to wage war with nearly no restraint over the last 17 years.

“Because of the leadership put forth by Sens. Bernie Sanders, Mike Lee, and Chris Murphy — and the tireless advocacy of hundreds of thousands of Americans — the U.S. Senate was today finally forced to confront America’s unauthorized role in Yemen’s deadly civil war,” Kate Kizer, policy director for Win Without War, in a statement.

“We commend the 44 Senators who agreed that U.S. military support for the Saudi-led coalition is unconstitutional, counterproductive, and doesn’t serve U.S. national security interests,” she added. “Today’s vote should serve as a sober reminder to Saudi Arabia that it must immediately move to resolve this conflict diplomatically, and that American support for its war in Yemen is not unlimited.”

Kate Gould, legislative director on Middle East policy for the Friends Committee on National Legislation (FCNL), said that despite the resolution’s failure, the “groundswell of grassroots activism to end this war is not going to let up until this illegal war ends, and U.S. pilots stop fueling U.S.-made bombers to rein down U.S.-made bombs on schools, hospitals and neighborhoods. The U.S. must stop literally fueling the deliberate killing and starvation of countless civilians in Yemen, and support a peaceful solution to end this crisis.”

Share
Previous AMERICA’S FOSTER CARE SYSTEM IS THE PIPELINE FOR CHILD SEX TRAFFICKING
Next 15 Years After Invasion, Many Americans Still Fail To Recognize Unending Scale of the Crime 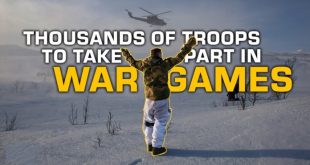 US “Forever War” in Afghanistan Near Ending? 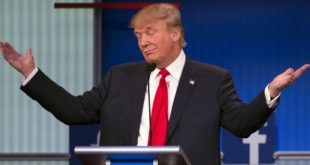 How people around the world see the U.S. and Donald Trump in 10 charts 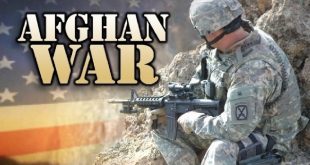