Breaking News
Home / America / The Defense Budget Should Shrink In Response to the End of the War, But We Are Seeing an Increase Instead

The Defense Budget Should Shrink In Response to the End of the War, But We Are Seeing an Increase Instead

On October 5th, Robert Reich tweeted out “We just ended the longest war in U.S. history, yet we’re still increasing the Pentagon budget. Could there be any clearer sign that congress is in the pockets of the defense industry?” It is not often that I find myself agreeing with Robert Reich, but I must admit that on this one he hit the nail right on the head. Why is it that this extensive war ending did not see a decrease in military spending along with it? Below is a record of the Military Spending Defense Budget over the last couple of decades as well as two graphs to better visualize the data: 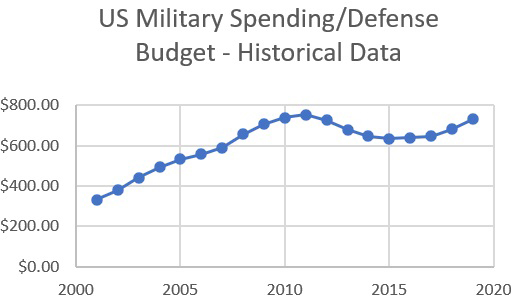 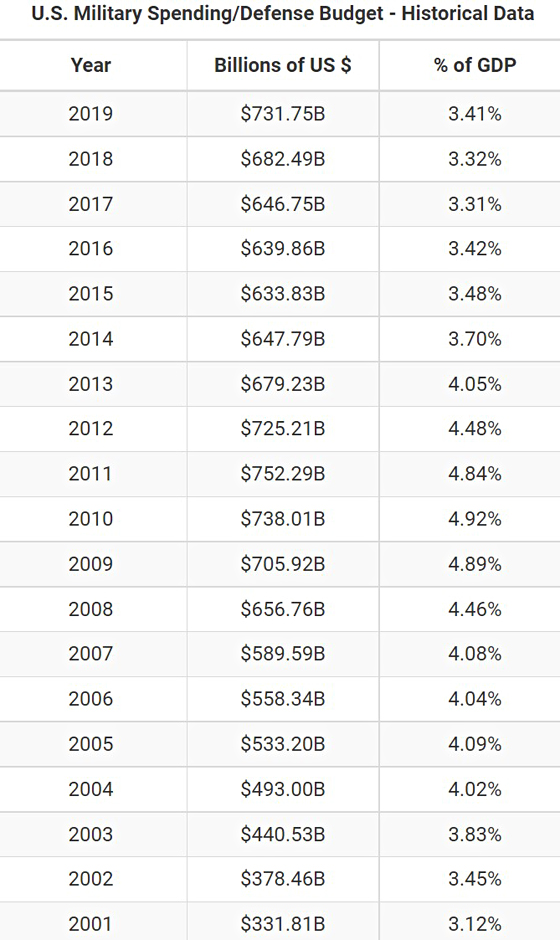 While it is impossible to dispute that the actual amount spent on military over that time, the data does also present it as percentage of GDP which is a sneaky way to make the expenditures seem almost constant. However, the GDP is not as reliable a metric as mainstream economists generally assume. One can turn to brilliant Mises Institute economist, Jonathan Newman’s lecture entitled Austrian Alternatives to Conventional Economic Statistics where he explains the following serious issues with GDP:

Household production is ignored. Sometimes we make goods for our own personal use (e.g., low level home improvement) or perform services for ourselves (e.g., mowing our own lawn).

Black market transactions are difficult to measure. The production of illegal goods and services is technically a part of total output, but doesn’t get counted in GDP.

GDP/capita is not the best measure of overall well-being, even though it is used that way sometimes.

Leisure is valuable, but not counted in GDP because it isn’t produced and traded. Sometimes we choose not to produce because we value the alternative, like retiring or even relaxing on the weekend. GDP would decrease for these reasons, even though we are getting what we want.

The stuff inside GDP is heterogeneous and unequally distributed throughout the population. GDP just tells you the total dollar amount, but cannot tell you anything about income distribution, wealth distribution, growth potential, size of the government, etc.

Consumption is exaggerated and international trade is understated.

All these points matter for the sake of discrediting the use of GDP statistics, but this last point in particular is most important in this specific conversation as we are exclusively measuring government expenditures that are not subject to the profit and loss test when we look at military spending. They use tricks like this to hide the fact that they are regularly expanding the empire. But we aren’t just looking at how much military spending is occurring, below is a graph of how much has been spent in Afghanistan over the last several decades. 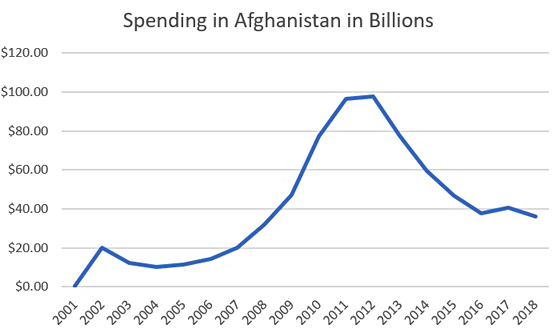 We saw an obvious peak and a down trend since then, however we are still seeing tens of billions of dollars having been spent in Afghanistan. So now that we are leaving Afghanistan should we not be seeing tens of billions of dollars no longer needed being directed to military spending? Where did that money go? Unfortunately, we are not seeing it because Robert Reich is in fact right that congress is in the pockets of the defense agencies. Even now seeing the end of a war, we are not seeing the actual contraction of the empire, just moving pieces around.

Share
Previous No Accountability and No Apologies
Next U.S. Border Authorities Failed to Prepare for Influx of Haitian Migrants Despite Weeks of Warnings